skip to main | skip to sidebar

From beginning to end, a new story to read

Comic Review: The Adventures Of Tintin: The Broken Ear 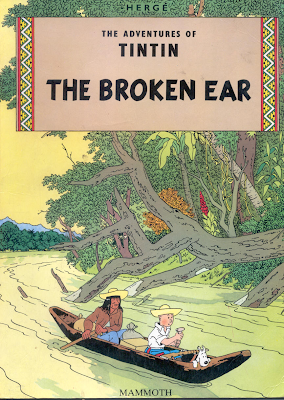 What's It All About: A South American idol is stolen from a museum and replaced with a fake.  Tintin finds that the man who made the fake has also been killed but has left behind a parrot who says the murderer's name.  He tracks down the man on a ship to South America, only to find that the man is killed by other men (Ramon and Alonzo) who are also after the idol.  Tintin turns Ramon and Alonzo, who murdered the man who murdered the man (stay with me) only to find that they are friends of the man he has turned them over to, a Colonel who is corrupt.  Tintin is framed and sentenced to death.  Just as he is about to be killed, supporters of General Alcazar, who are trying to overthrow General Tapioca, burst in and release Tintin, thinking he must be a rebel like them.  General Alcazar is so impressed with Tintin, he makes him his aide-de-camp.  I'm going to actually skip ahead on this one because it is so convoluted that all I'd be doing is saying, "and then he went here and this happened" or "then these guys think this so they do this".  I mean really, this story makes almost no sense.  You find out towards the end that the idol is rumored to have a diamond in it which is why Alonzo and Ramon want it and are apparently willing to go all over the globe for it.  Tintin and the two men finally track down the real idol in an American's possession on a steamship.  They wrestle over it and the diamond falls into the ocean.  Alonzo and Ramon go in after it and drown.  The American agrees to let Tintin take the stolen idol back to the museum.  Whew! Seriously. 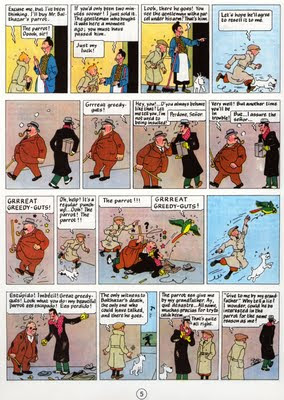 My Favorite Bit: In this one I really like the scenes in South America in the city of San Theodoros where General Tapioca is in charge until General Alcazar succeeds with his revolution.  Other than that...not much in this one. 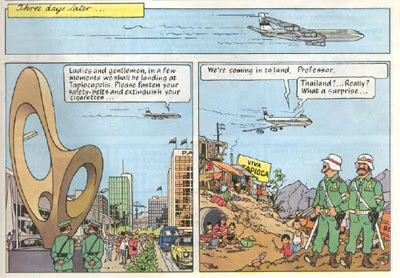 Go Get It: The Broken Ear on Amazon US 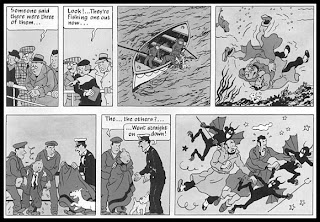 Alonzo and Ramon drowning trying to get the diamond.
Some say this may have been a hallucination of Tintin's.

Posted by R. Nigh

R. Nigh
Santa Cruz, California, United States
I'm an artist/writer from Santa Cruz, California. I love reading, writing, art, and music--making and enjoying these forms are my favorite and my best. We've got two kids, a mountain of books, and my art supplies strewn throughout the house.